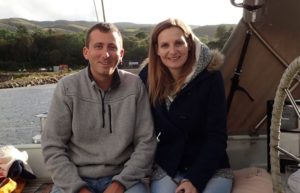 Trustee of UK charity and head of UK operations.

Cameron Springthorpe and his wife Abi have been overseeing our old Home Base since we left and has been by way and far our most loyal supporter since I was doing boat deliveries back in 2001. Cameron has been a seaman for many years beginning with his solo voyage from Falmouth to Southern Portugal at the age of 16. Since then he has accumulated knowledge from his many transatlantic voyages and running tours in the tricky waters of Scotland and the Western Isles.

In addition to this Cameron helps us frequently with any problems with electronics and with all longsuffering too! He has liaised with JAARS in North Carolina in helping them and us to set Kwadima II up as another mission vessel which will also operate services between Alotau and Misima as well as carrying Bible Translators to the various communities.

He is now very involved in the ministry of www.kingsfleet.org networking and encouraging marine ministries around the world.