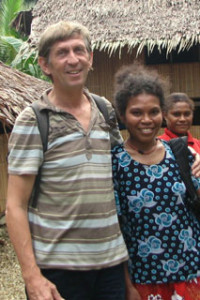 Mission Principal’s / Head of ministry and practical training, and Pastor.

In 1978 Guy was running a coconut plantation in Papua New Guinea when he had a personal experience of Jesus Christ which led him to totally refocus his life.  In the preparation for his call he first trained in Carpentry and Joinery in 1983 and worked in that trade until 1988 when he Attended Rhema Bible Training Centre in Randburg, South Africa.

At this time he not only learned in the classroom but also in the field with ministry involvement in Lesotho, Soweto and Alexandra Townships and in the North at Louis Trichardt ministering to the great diversity of South African people and learning much through God’s leading, such as the importance of the Lord’s instruction in Matt 28:19/20. and the foundational aspects of Biblical Christianity.

On returning in 1991 his direction was to restore the connections with the sea and he qualified as an RYA Yachtmaster in 1997 after which he set up a yacht delivery business accumulating more than 40,000NM delivering yachts for UK clients.

Colleen received the New Birth in 1991 during a revival on Misima Island at the United (Methodists) Church.  She was involved in village to village ministry, experiencing the power of God while doing so.  In 1997 she worked with a group who had left the United Church to continue this village ministry.

In 1999 she trained in Salem Training School for children’s ministry in Goroka in the Eastern Highlands Province.  The group Colleen was involved with on Misima formed a new organisation called The United Charismatic Mission in which she played a principle role in children’s ministry and becoming a pastor of one of their congregations in Ebora on the far West of Misima Island.  .

In 2007 she attended Rhema for their School of Ministry course with a number of leaders of the UCM ministry which resulted in cross-denominational ministry and restored their fellowship with the Methodists to the extent that they share platforms regularly.

Guy and Colleen were married in 2010.