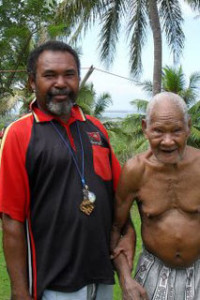 Ronnie is the founding pastor of United Charismatic Mission having planted 6 congregations on Misima and other islands in the Louisiade Archipelago around Misima as well.   Ronnie started out running a fishing dory for the Fisheries Dept based at Kuiaro, near Samarai from where he regularly went out to the sunken barrier reef on commercial fishing operations.

He entered the ministry following the revival on Misima in the 1990’s.   He, together with Solomon Mogi felt led to separate from the United Church (Methodists) on account of the baptism in the Holy Spirit and their insistence on baby baptism.   So the ministry at the UC asked them to leave.  Colly was with them too and they commenced their work determined to obey the Royal Law of Jesus to walk in love to those who had rejected them and now most of the UC have warmed to UCM and often minister in each other’s congregations.   This in turn has had a healthy cross denominational effect of opening a platform of village communities to the Word as distinct from the religious ecumenism of Western religions of `all faiths and none’.

Ronnie and Elsie have played an important part of caring for Living Water while we have been in Alotau working on Kwadima II and making preparations for we and UCM to work together.